3. The Next Best Brain Food for the Big Exam is: Spinach

If you have to pick one go to brain food, spinach should be it. It has a ridiculous amount of nutrients and other vitamins

Let’s take a look at some of the Nutrients in Spinach: 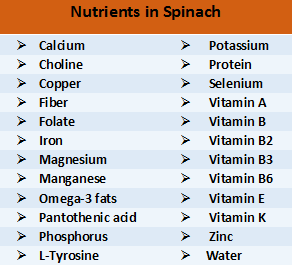 Let’s look at some of the nutrients in spinach to see why it’s so beneficial for improving your ability to focus and for overall cognitive functioning.

First, let’s look at Manganese. Manganese is also found in two of the other brain foods we talked about—blueberries and strawberries. That could be because Manganese is one of the minerals responsible for keeping your brain operational and functioning normally.

It has various enzymes that assist in forming connective tissues. Perhaps manganese is responsible for the growth of the hippocampal grafts in the brains of the rats that were examined in the blueberry studies.  It’s difficult to pinpoint the one nutrient that directly caused these results, but the examination of the rats brains showed significant development and worked as a brain booster for the rats.

Perhaps just as important, if not more, for brain function is the presence of Vitamin B and Folate. Spinach is loaded with both.

Folate plays a role in decreasing levels of amino acids that can impair brain functioning. Specifically, it protects the body against homocysteine, an amino acid that blocks up and damages your blood vessels.

Researchers also suggest that Vitamin B keeps your brain young.  Many of these scholars are proponents of the philosophy that Vitamin B has the ability to aid or fortify the brain stem to preserve your brain and boost overall functioning.

Let’s take a look at the sugars, glycemic index and glycemic load of Spinach (note: the numbers are an approximation or average from several sources found in the references section):