4. The Next Best Brain Food for Exams is: Walnuts

The moral of the song is to read the signs.

Now let’s apply this moral to life, and since we’re talking about walnuts, let’s observe… 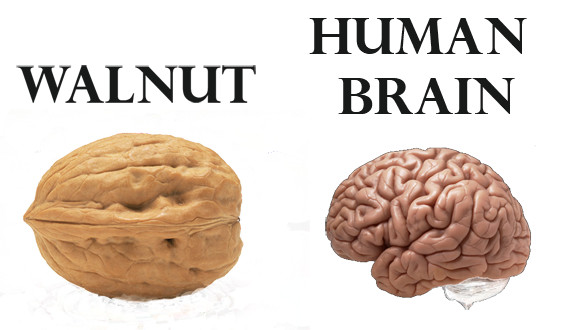 That’s my spiritual side talking though.  If all of the evidence on this website were based on that type of reasoning, you probably shouldn’t rely on it.

However, the analysis does not conclude there.  Now we get to talk about the science and nutrient make-up of walnuts and why they are a brain booster food.

Perhaps the most revered characteristic of a walnut is its abundant supply of omega 3 fatty acids.  Omega 3 fatty acids have been thoroughly studied in numerous medical disciplines due to their widespread health benefits.

Specifically, Omega-3 fatty acids have been studied in the field of psychology due to their ability or purported ability to prevent and/or regulate depression.

While some of you may be sitting there thinking:

This site is supposed to be about brain function, plus I’m not depressed, so why do I care?

You should care though.  Because the reality is that mood has a direct effect on brain functioning. Mood is just one of the moving parts involved, and it has to work in conjunction with the rest of your body to allow you to perceive, process, and react.

When you’re really upset or in fear for your life, or have any instinctual feeling or reaction, you go into fight or flight mode.  The most primitive part of your brain takes over.  I call it cave man brain.

When this happens, your brain’s ability to communicate with the frontal lobe, which is responsible for higher cognition, is severely limited.

It’s one explanation for your friend who can tell you a great story, but when he has to go up in front of a big crowd, he forgets everything he’s supposed to say.  That’s because he got nervous, and the primitive part of his brain took over.

So the idea is to keep a balanced mood and demeanor, so you don’t have to worry about the primitive part of your brain affecting your ability to communicate with the frontal lobe.

So, whether you’re depressed or not, mood is important.

More evidence of the health benefits of Omega-3 in Walnuts:

Omega 3 fatty acids have received significant praise in the medical and dietary fields because of the slew of health benefits they provide.  These acids are responsible for acting as a casing for neurons.  Other pages of this website discuss exactly how omega-3 works with neurons.  You can find that information at 31 Brain Boosting Foods.

Various authority in the field would even go as far as to suggest that it may play a major role in preventing cancer. In his book, Anti-Cancer, the belated Dr. Servan-Schreiber posited the idea that creating a balance between omega-3 and omega-6 fatty acids could be one of the most effective measures we can take to protect our bodies against cancer.

His theory was that cancer is typically a product of inflammation.  In order to fight disease, the body goes through a process called angiogenesis.  Angiogenesis is when the body creates new blood vessels out of existing vessels, so it can get more white blood cells to the infected area.

Dr. Servan-Schreiber suggests that military headquarters are created at the center of the inflamed area, and angiogenesis is the body’s mechanism for providing reinforcements.

However, cancer cells have the ability to turn that military headquarters against our bodies, causing the newly formed blood vessels to act as reinforcements for the cancer cells, which then attacks our own bodies.

If we never have inflammation or it is greatly reduced, then we will not have to deal with angiogenesis (as much), and the military headquarters will never coalesce.

Additionally, cerebral edema (inflammation) hinders our brain’s ability to properly function.  Thus, if inflammation can be prevented or at least mitigated through omega-3 intake, our brains will be in a better position to function on all cylinders.

There are numerous varieties of nuts out there. Here’s a short list of some of Walnuts relatives, which are classified in the tree nut category: 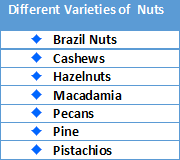 Out of all of these nuts, why are walnuts the best nut for your brain?

It could be linked to a number of different nutrients, but one notable distinction between walnuts and the other nuts is that walnuts are the only nut that contain a significant amount of L-arginine.

When it comes to the various nut varieties, black walnuts have been found to have the most L-argenine with about one ounce containing 1,130 mg of L-arginine.

L-arginine is a vasodilator.  That means it expands your blood vessels by relaxing the smooth muscle cells in them.  This creates more blood flow, and oxygen, throughout the body, which means more blood is getting to your brain.

A research investigation team at The University of Texas Health Science Center tested the melatonin levels in walnuts and found that it is present.  The team also tested whether eating walnuts raises levels of melatonin in the blood and the increase in total antioxidant capacity. Studies have shown that patients with Alzheimer’s disease (the memory disease) had significantly low levels of melatonin. Clinical studies have found that individuals supplemented their diets with melatonin have been able to prevent the effects of Alzheimer’s or at least delay its onset.

Based on a study conducted on rats that were administered a drug, haloperidol, which deteriorates rat brains in a similar fashion to that of Alzheimer’s. The rats were later given doses of melatonin, which showed a reversal in the rats by significantly improving memory retention deficits.

Further Examination of the Brain Boosting Abilities of Walnuts

Walnuts also have Alpha-Linolenic Acid (ALA) which is another inflammation reducer and has the ability to reduce blood clotting.

Dr. Lenore Arab at the David Geffen School of Medicine spearheaded a project that used a series of six cognitive tests.  Dr. Arab and the research team found that the participants that had a higher walnut intake performed much better on the tests.

It doesn’t take a significant amount of walnuts either. Dr. Arab recommends a handful a day for better mental health.

Click here to see the next Best Exam Food