In an attempt to simplify the process of maximizing brain functioning, 1 the concept is this: your brain is like a well-oiled machine that is constantly under attack by free radicals. 2

Free radicals are molecules that were split from their weak bond. 3  After the molecule splits from its bond, it becomes unstable and will attack the nearest stable molecule in desperate search of an electron. 4

The attacked molecule loses its electron during the attack and then becomes a free radical itself, and the vicious cycle on the war against free radicals begins. 5

The objective is to eliminate as many of these free radicals as possible to allow your brain to continue its normal functioning, free from disruption.

This can be accomplished by fortifying your natural defenses through massive antioxidant intake. 6

Too much sugar can clog up the brain, overloading it, which results in foggy brain.

Not enough sugar deprives your brain of the fuel it needs to run.  Thus, it is important to keep a steady blood sugar level, but simultaneously provide a constant (sustainable) supply of glucose to fuel the machine. 8

Whether you are maintaining an adequate supply of glucose in your blood may be assessed by the amount of energy you have throughout the day, at least from a general practical standpoint.

Another way to determine the amount of glucose in your blood can is by reviewing the glycemic index of the foods you are eating.

The following are several concepts that were explored when preparing the content of the Super Brain Diet.

I’ve used these food combining techniques in my own life, and I’ve seen noticeable differences in energy and mental acuity.

Now, let’s look at a few theories that Harvey and Marilyn Diamond posit in their book, Fit For Life:

The basic underlying concept is a  focus on food combination that “works with your body[’s] [natural cycles] to free up energy.” 9 The digestion of food takes up more energy than any other bodily activity, including running, biking or swimming. 10

Can you imagine if you could hone that much additional energy? Think about what you could accomplish.

One approach on food combining suggests that a tremendous amount of energy can be conserved by merely eating the right combination of foods.

Look at the example Harvey Diamond usedour body’s inability to break down meat and potatoes (one of the most common food combinations).  11

He talks about how the starches in the potatoes basically neutralize your stomach acid and make it extremely difficult to digest the steak.

This massive amount of energy can be reduced through proper food combination.

Once the proper food combination is implemented, that “newly found surplus” of energy can be allocated toward brain functioning and not unnecessarily wasted on breaking down food.

If you don’t believe this theory, try eating a big plate of steak and potatoes right before an exam or big presentation, then come talk to me.

The Diamonds believed that you should not eat more than one concentrated food at a time. 12

This is a difficult concept to apply as many of today’s traditional dishes are sandwiches (bread and meat), meat and potatoes, meat and rice, and the list goes on and on. The disappointing truth is that most people can’t live on a food combining type of diet.

Regardless of you’re ability to do so, you’re awareness and implementation of it may allow you to conserve energy on a day you need it the most.

On the positive side, the food combination approach is only used in part as a detoxification technique and at times as a way to increase energy.

It doesn’t have to be strictly followed. In any event, your diet should be loaded with salads, lettuce wraps, and soups–often consistent with the food combination approach.

Try it out, and see if it works for you!

There are certain physiological cycles to which the body closely adheres. This includes your body’s digestion/absorption/detoxification cycle.

Every day our bodies go through these general cycles at their highest intensities as listed below (presuming your body is on a typical circadian rhythm):

Assimiliation – absorption and use (8pm-4am)

During certain times of the day, a different phase of the cycle functions at its highest intensity.

The Super Brain Diet capitalizes on this natural bodily cycle to bring your body back to homeostasis and utilize its full physical, mental, and energy potential.

Because our bodies are made up of at least 70% water, at least 70% of our diets should include foods that have high water content. 16

What about the Human brain though, what is its make-up? 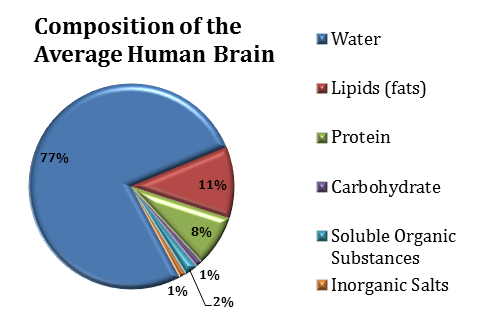 As we see from the chart, the brain is composed of 77% of water. Thus, to keep a balanced ratio with the foods we eat, its important to note the water content of the foods and ensure your diet is heavy in those foods.

Diamond believes that water is not sufficient and that you have to eat fruits and vegetables because they have certain enzymes and elements. 19

Thus, water alone is not sufficient.

Should I Drink Water With My Meal?

While living in Spain, I had the fortunate opportunity to stay in various hostels. I stayed in one particular hostel for about three weeks while I was searching for more permanent living arrangements.

During that time period, I developed numerous friendships with the guests at the hostel. Many of the guests were from random countries all over the world.

To deepen our cultural experience, a number of us agreed to take turns making each other dishes, usually a dish that was typical of that person’s country.

One of the most memorable people I met was a guy from Brighton, England. I mentioned to him that I was having problems with indigestion and heartburn.

After we had eaten a few meals together, he told me that he knew why I was getting these problems…

He said, “That’s your problem mate.  You are drinking water with your meals. That’s what is causing your heartburn and indigestion.” I looked at him as if he were crazy.

I had studied quite a bit on diet and health but had never heard that theory before he mentioned it.  It was such a small thing, but always struck a deep curiosity in me.  He told me that the water diluted the stomach acid and adversely affected my ability to digest the food.

Not until years later, did I read the same piece of advice in Fit for Life. Extremely interesting theory, at least enough to take note and perhaps try out.

After my friend had told me that, I made some inquiries to a few dieticians and health gurus.

Many of their responses dismissed this theory as if it were embellishing the effects of water.  The invariable response was something along the lines of: “water is critical for the digestive system, your theory about drinking water while eating is absurd.”

A few of them conceded that massive amounts of water would potentially dilute stomach acid because it has neutral pH levels and the stomach doesn’t release additional acid to account for oversaturation by the water.

The responses had no effect on my future course of action.

The idea was implanted in my head.  From the day my British amigo told me those things, I minimized water drinking during meals.

Instead, I would wait until about 20-30 minutes after the meal to drink any appreciable amount of water.  Don’t get me wrong, I’m not suggesting that you try to eat a full meal without any water to wash it down.

Drink it when you need it.

However, if this theory on water and diluting stomach acid has any validity, my heartburn and indigestion problems may be solved.

Additionally, I would digest my food more efficiently and get that extra energy my digestive system didn’t use.

The Importance of Fruit

The Diamonds stress the great importance of fruit in one’s diet, and a few simple tips to maximize its benefits.

All that you eat is ultimately broken down into one of the following:

Glucose is the brain’s sole source of energy.

Fruit is glucose in the body.

Your body has the ability to digest fruit with ease. 21

Because fruit is your body’s best cleansing food It takes the least amount of energy to consume out of any other food group. 22

Additionally, it requires little to no digestion, so it smoothly flows right through your digestive system without consuming much energy.

On average, many foods will remain in your stomach anywhere from one and a half to four hours. 23

Most fruits remain in your stomach for 20-30 minutes (bananas = 45 minutes), 24 which is a minute fraction of the time and digestive energy, fruit takes to process.

How Should I Eat Fruit?

One of the most critical factors is that fruit is eaten on an empty stomach. 26

Because fruit is pre-digested and it provides fructose (a sugar that is very close to glucose— “[g]lucose and fructose have identical chemical formulas, note Drs. Mary Campbell and Shawn Farrell in their book ‘Biochemistry’; both are C6H12O6.”), 27 fruit is not broken down and digested in the stomach.

Thus, it does not sit in the stomach for any appreciable amount of time.

Rather, it merely passes through as if the stomach were a conduit for the intestines, thereby allowing the intestines to absorb all of the essential minerals, water, and enzymes that allow your body to effectively detoxify. 28

Any food eaten before fruit will sit in your stomach because it takes longer to digest, and that food can hinder the passage of fruit through your stomach.

This delay causes the fruit and other food start rotting and fermenting. 29

Instead of dozing off in my office at around 2-3 like I sometimes do after a big lunch, I found myself pumping through work. What did I do?

I had rationed lunches. I was eating about 1/4 of my norm.

I felt driven when i was still a little hungry .

He hypothesizes that the mild starvation makes them stronger. 31

I view it as your body going into survival mode and naturally becoming smarter as a result of adaptation and instinct. Your senses get sharper so you don’t starve.

This concept also struck me as similar to that of gardening.

When growing tomatoes, zucchini or many other fruit bearing plants, the starvation of water (and nutrients from the soil) often causes the plants to yield more fruit.

Or perhaps it could be likened to the forging of a sword, in which the steel must undergo an extreme heating process to bind the elements. You have to go through some heat to get stronger.

Remember the old adage: “what doesn’t kill you makes you stronger.”

Anyway, you get the point.  Don’t be a glutton!

If you learned anything from this blog or not, please let us know your secrets to eating smarter.